The Ups And Downs Of Daybed With Popup Trundle 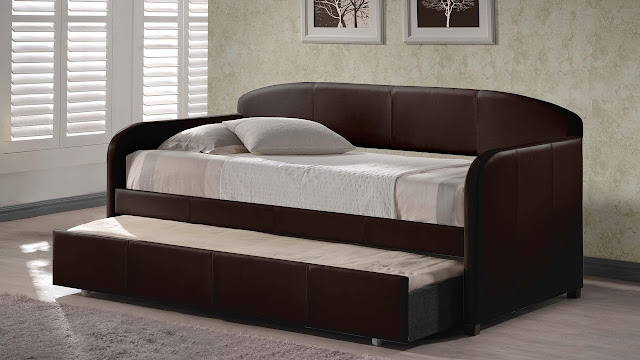 Getting to know a popup trundle

A popup trundle is a second hidden frame along with the mattress which can slide in and out from the bottom part of a bunk, twin, full beds or even a daybed, now commonly known as a daybed with pop up trundle. Before you are buying a daybed with pop up trundle, there are several things you need to know first. There is a significant difference between trundle beds and popup trundle. Trundle bed allows you to find two beds in one in which one of them is placed under another until it is time to use, however, the term “pop up” in pop up trundle gives a very significant difference in the practice.

You may assume that pop up trundle works by sliding out the other frame and mattress and there you have the other bed that positioned lower than the main bed. A pop up is more than that, the term pop up signifies what it says. The trundle in pop up trundle will pop out and lift up to be the same height a the mainframe.

The ups of daybed with pop trundle

This way of popping up will give you so many benefits such as two resting spots in one space, giving you one large sleeping area consists of two frames and mattresses side by side. The main point is a popup trundle is capable of providing a huge sleeping area when we need it by using only smaller space daily.

The downs of daybed with pop up trundle

While thinking that having a daybed with pop up trundle will give you advantages, there are some things you also need to consider before you finally think it is the best choice for you. The first thing is to understand that when it is being popped up it is not one, but actually two frames with two mattresses. This means you are laying down on the top of two frames that might slip apart during the sleep. The other problem that may surface is that you will have a larger seam formed from two different mattresses placed side by side.

To solve the problem of separating the frame, some people use bungee cords to make two beds stay together the whole time. While in solving the problem of having a large seam you can use good-fitting sheets or topping the two beds with a memory foam mattress pad.

Knowing the plus and minus of daybed with pop up trundle will give you an answer to whether or not you should have one at your home.

Home Design give you informatioan about home decor, interior, exterior, and many more

bedroom Before and After Design Ikea interior design Product Review